An Innsbruck Elopement With Sheep

Maggie & Cass are sheep herders in the beautiful state of Wyoming in the USA. But when it came to planning their wedding, neither of them wanted a big, traditional celebration. They decided instead to plan a trip to Europe and elope during their trip. After settling on Innsbruck as the location for their elopement, they only had one request for their wedding day. They wanted to spend the day exploring the local scenery and see as many animals as they could – especially sheep!

An Mountain Elopement In Innsbruck

Maggie & Cass met in high school, sharing mutual friends. But it wasn’t until a few years later at the country fair that they both confessed that they had been thinking about each despite all those years apart. And from that moment, they were officially an item.

They cherish their quiet mountain life in Wyoming, spending their happiest days outside in nature with their animals. Once they had decided that they didn’t want a big wedding, they spent most of their wedding fund on expanding their flock of sheep. What was left over, they used to plan a trip to the Alps where they wanted to see different breeds of sheep from across Austria and Switzerland. And in the middle, they would say their vows to one another surrounded by beautiful nature.

When they told me about their dream to have photos with sheep on their elopement day in Innsbruck, I knew it was going to be a challenge. During the summer months, most sheep roam freely in the mountains around Tirol. But come September, as the weather starts to get colder they are brought back down to the valleys and in to the barns ready for winter.

A few months out from their October elopement in Innsbruck, I contacted the Tirolean Sheep Association with a very unique request. I asked them if they could put me in contact with any local farmers around Innsbruck who would be happy to let Maggie & Cass come and visit their sheep on their wedding day. And after a few weeks, I got a response. One wonderful farmer in Innsbruck said YES!

A few days before their elopement, I visited the farm to see where the sheep were and to chat about the couple with the farmer. Despite being completely shocked that a bride in a white wedding dress would want to visit a sheep farm on her wedding day, he showed me around and introduced me to his beautiful flock of Tirolean mountain sheep.

On the day of their elopement in Innsbruck, the weather decided to throw us a curve ball, and the morning skies were darkened by rain clouds. We met in Innsbruck at the registry office in the Golden Roof where Maggie & Cass signed their marriage papers certifying that they were now legally man & wife. After a quick walk through the city in the rain, we jumped in the car and headed to the farm. 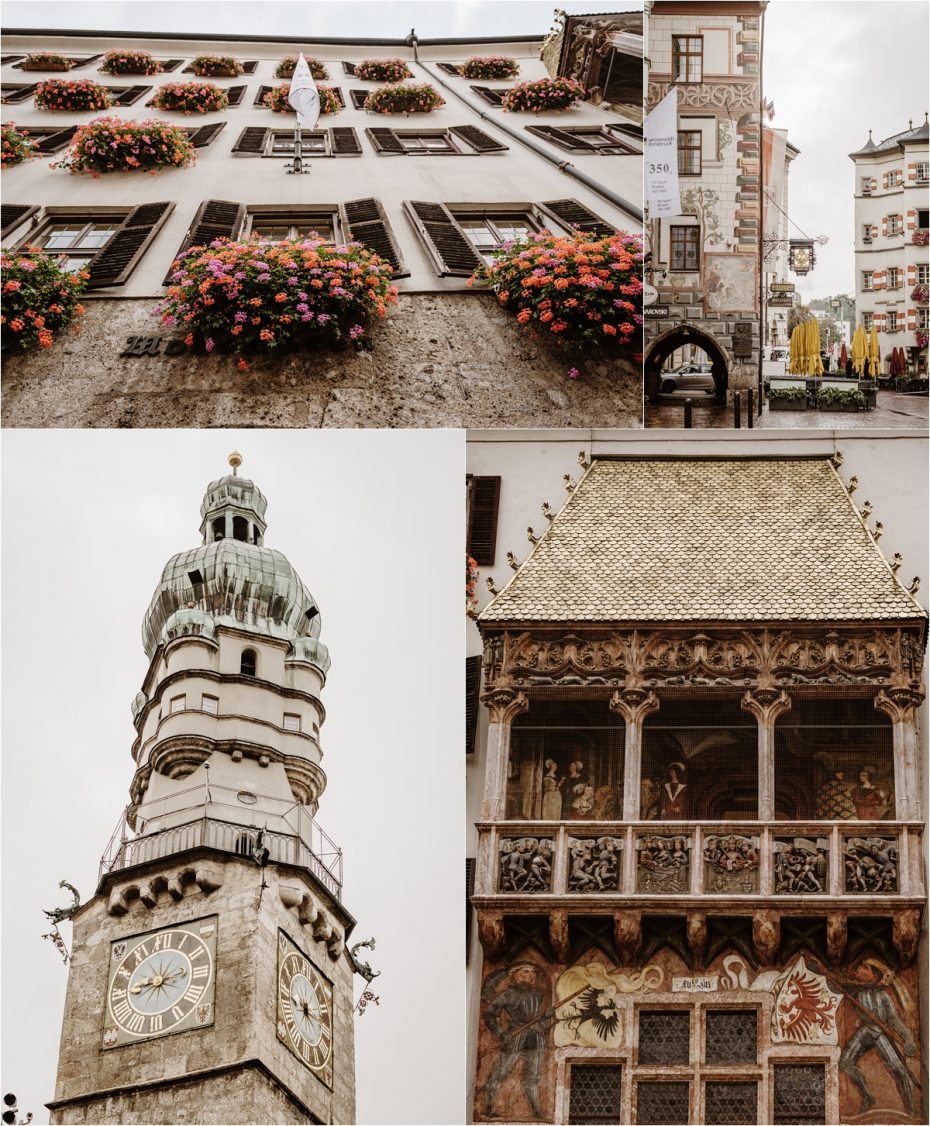 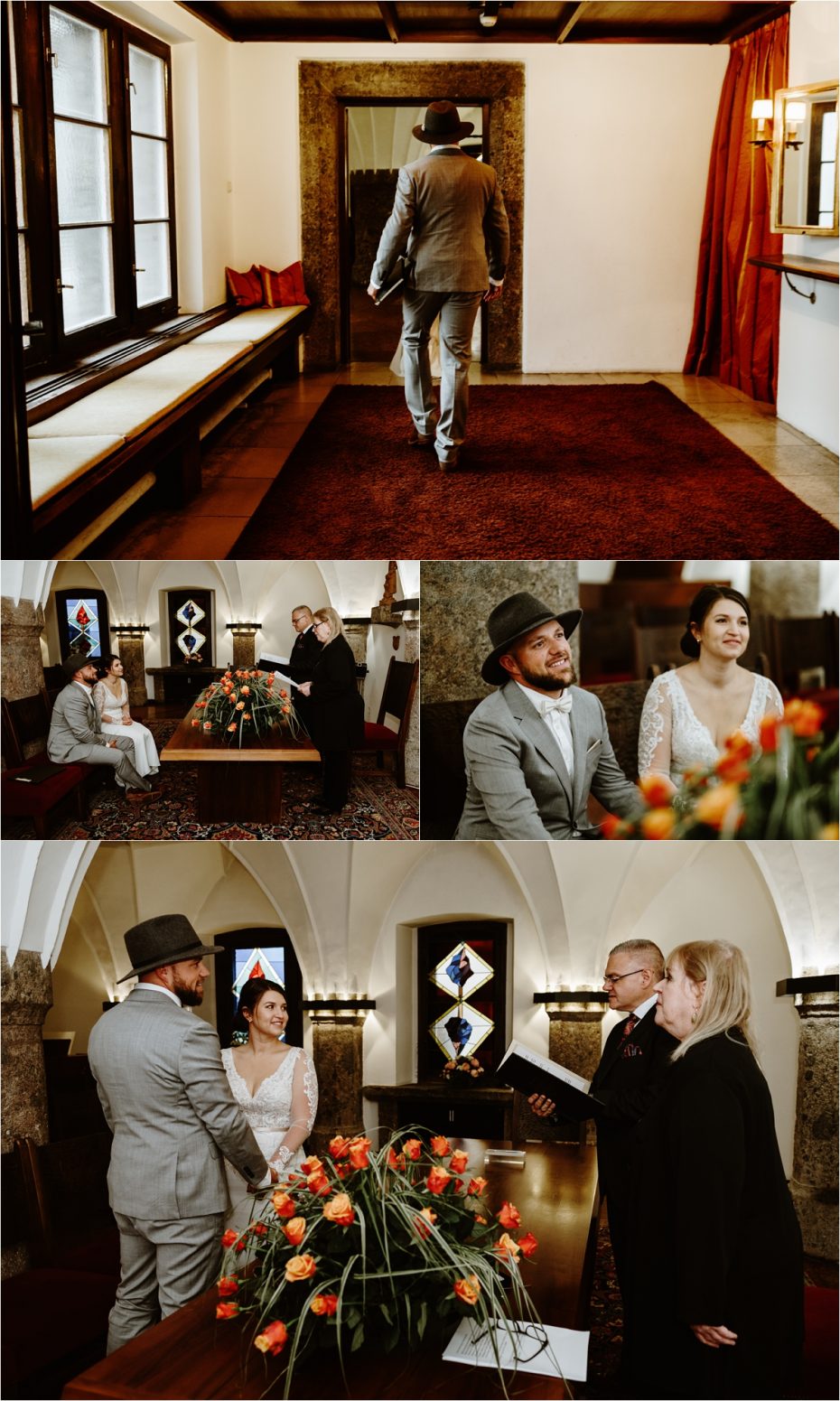 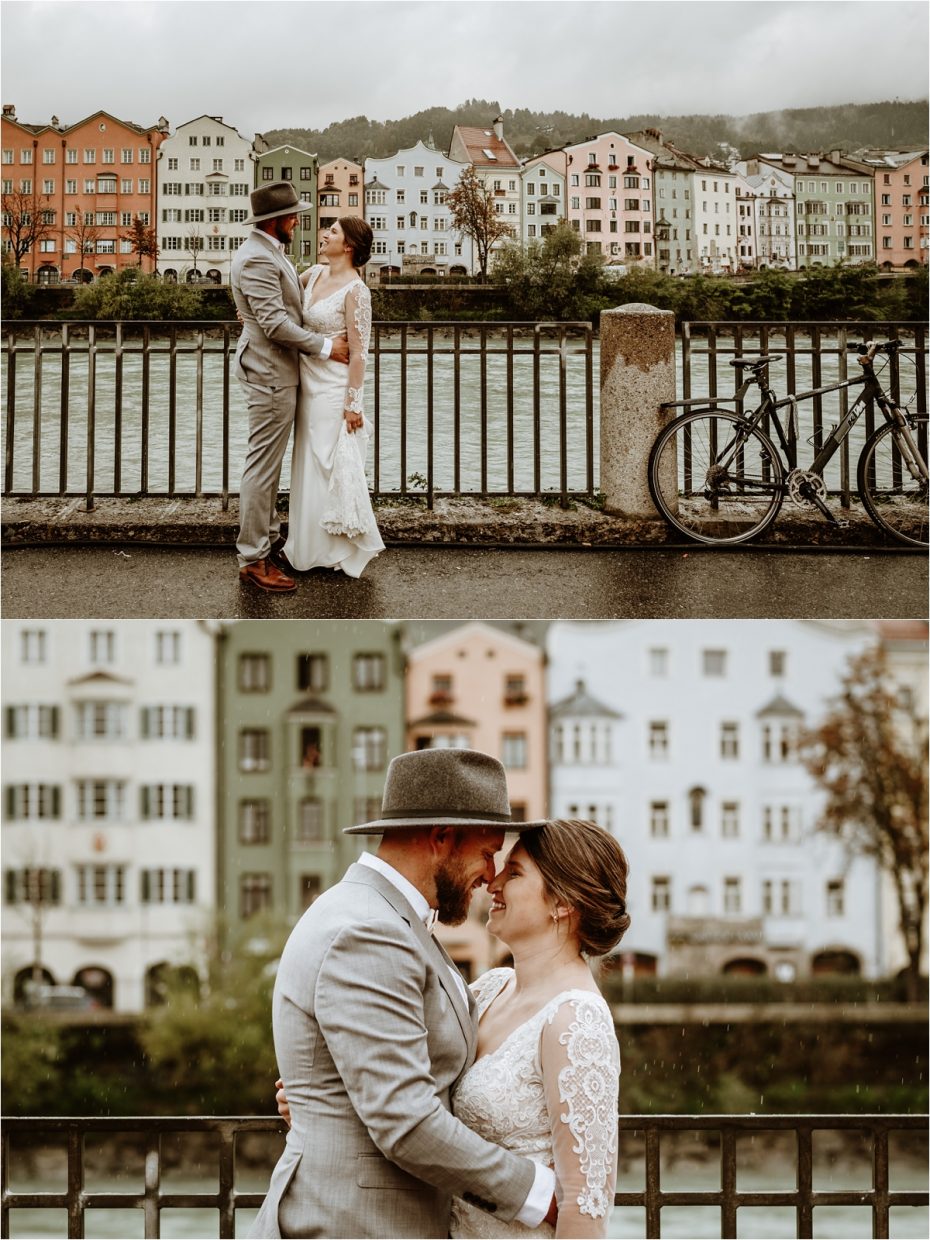 Maggie & Cass were given a tour of the sheep farm. First they were invited in to the barn to meet the majority of the flock, who enjoyed getting chin scratches from the couple. Then it was time to go outside and meet the newest members of the flock. Armed with a bucket of food, Maggie & Cass were taken outside to the paddock, where a number of sheep were grazing with their young lambs (mountain sheep have babies twice a year – a fun fact I learned from the farmer that day). They were fascinated at the differences between the sheep of Austria and their sheep back at home, and I did my best to act as translator as they asked the farmer all about this particular breed. 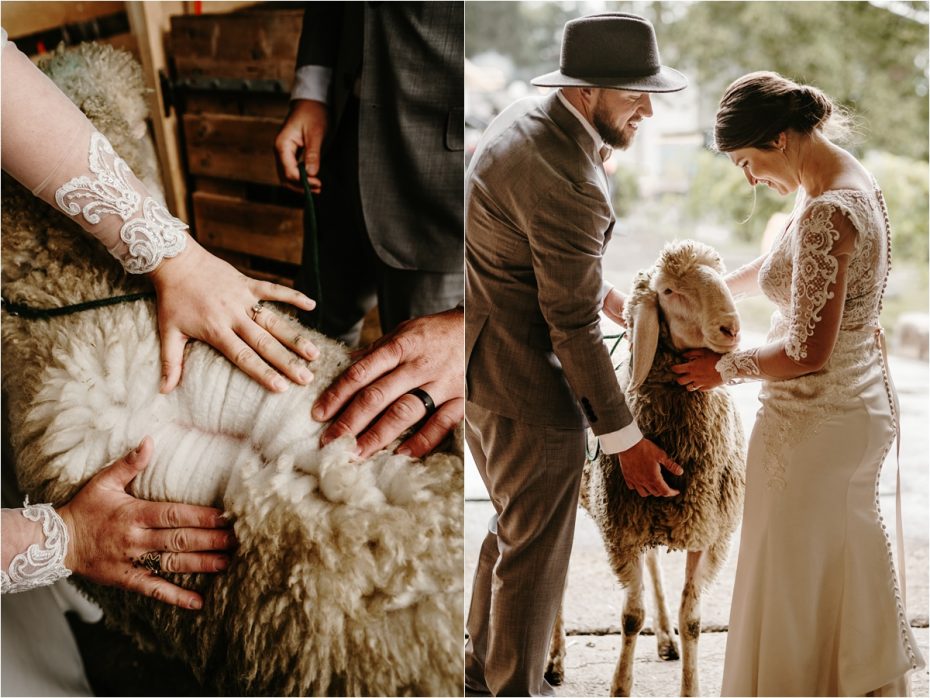 Damp from the rain, and covered in mud from the sheep, I don’t think I’ve seen a happier couple than Maggie & Cass as they stood in a field surrounded by sheep on their wedding day. Now the only thing left was to find somewhere quiet for them to say their vows.

We saw a break in the clouds on the south side of Innsbruck, and headed over that way to find the perfect location. In the meadows above the Inn valley, the clouds started to lift, and Maggie & Cass read their hand-written wedding vows to one another, with the climbing of cow bells in the distance. 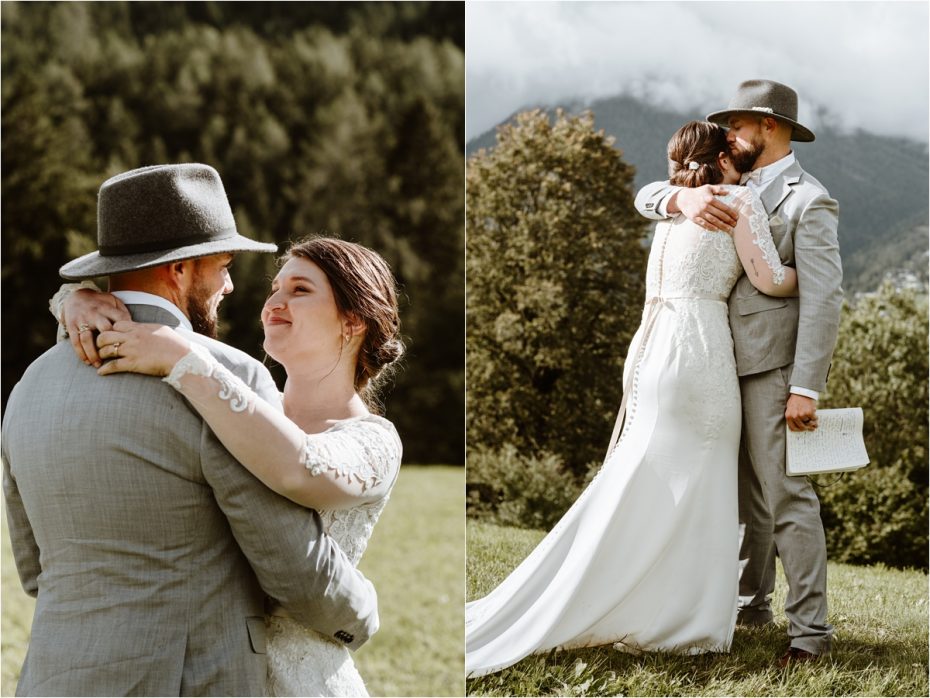 Want to elope in the Alps? 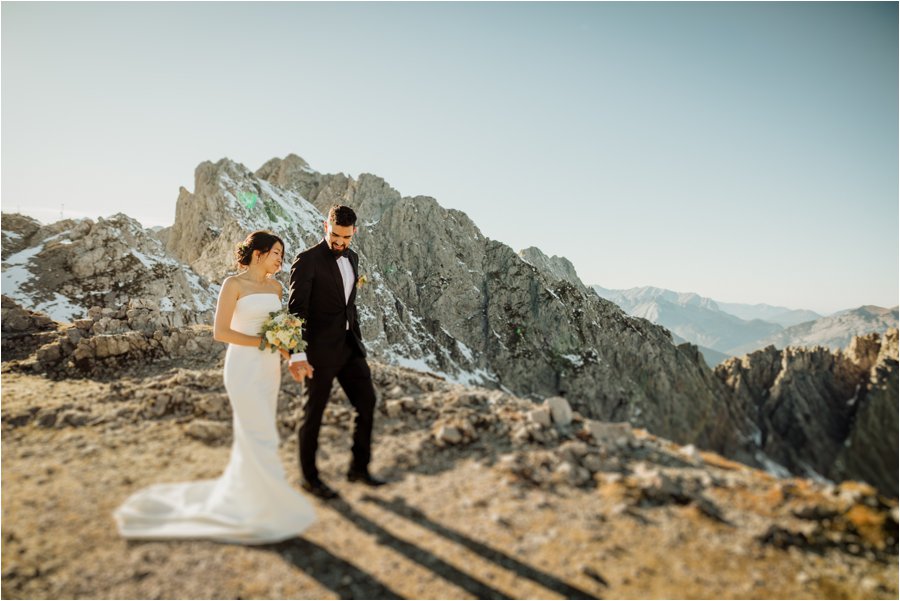 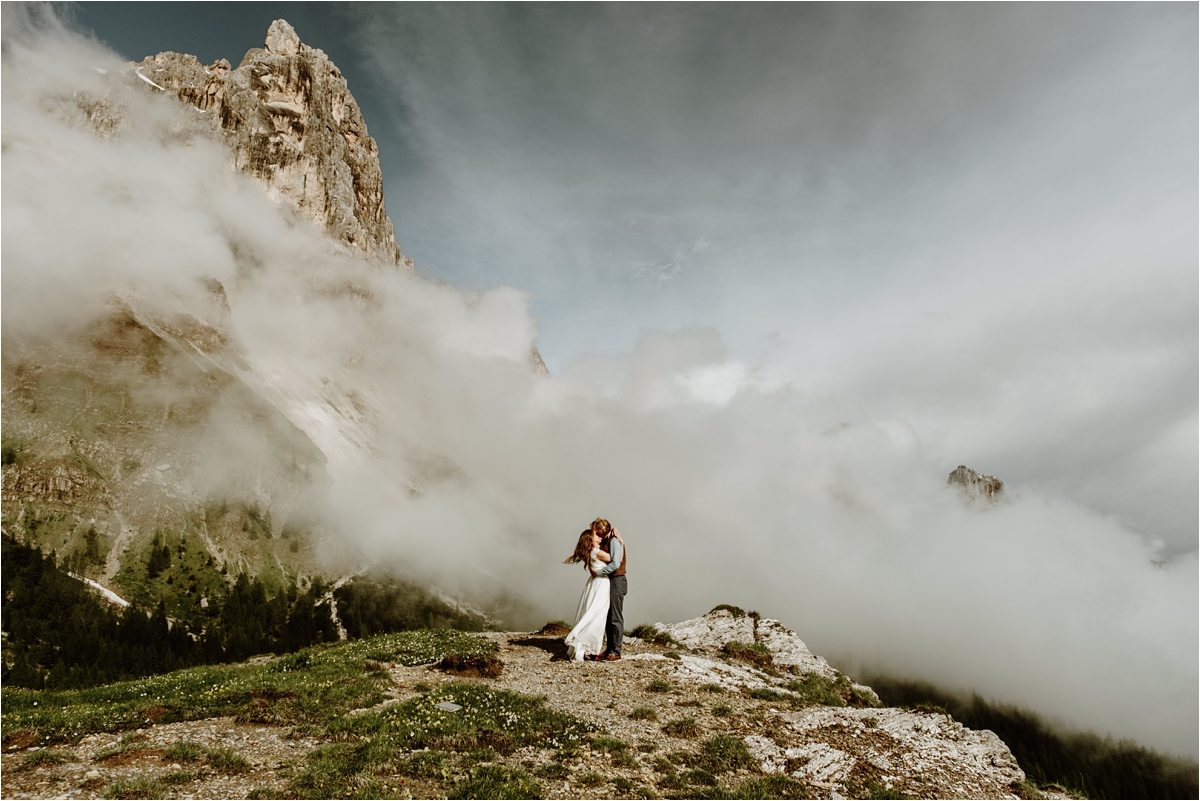 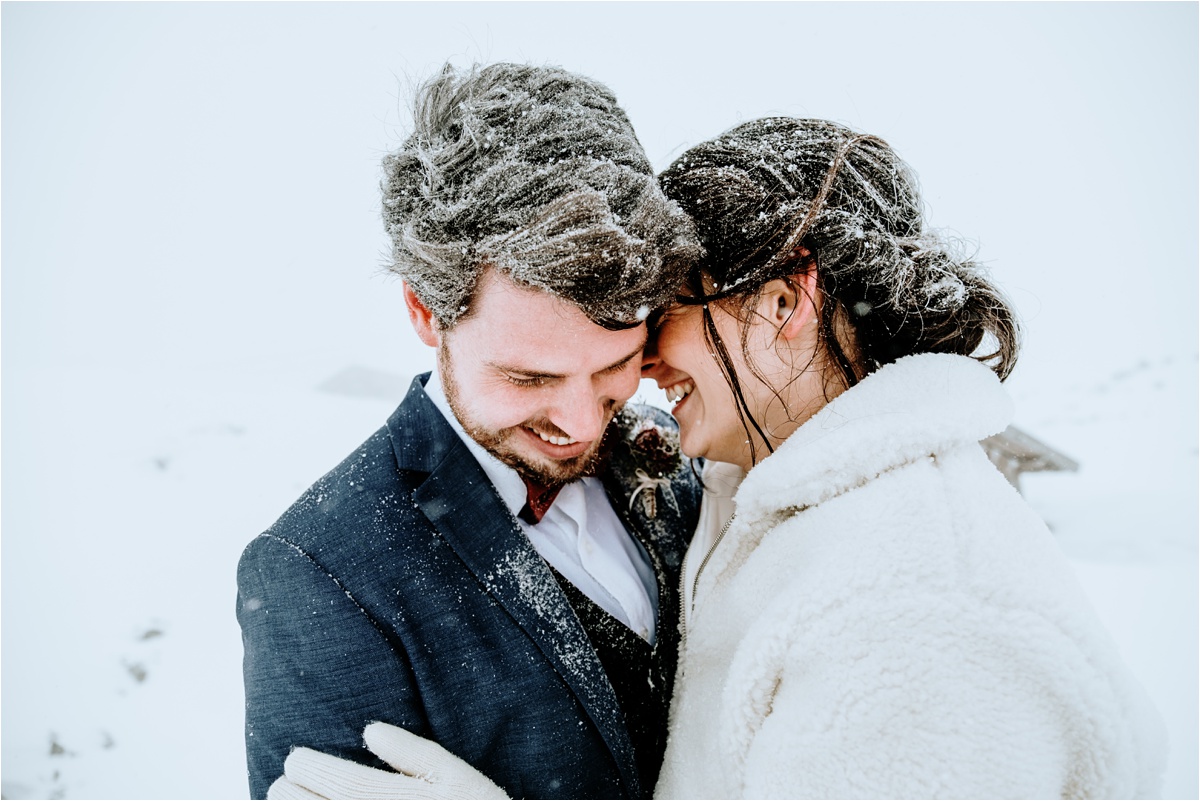 These are soo beautiful! I love your tones so much!