At the very start of planning their multi-day hiking elopement in the Dolomites, I asked Shayna & Jake to describe their perfect day.

“I wake up in a lovely hotel or super cool airbnb and get pampered (hair, makeup) listening to a playlist that my “bridesmaids” have curated for me. I read notes from my parents and would love the opportunity to zoom/FaceTime with my family while I’m getting into my wedding dress. The first look is an important moment for me. Followed by vows, and exchange of rings in front of mountains plus water. After vows I would love to stay in my dress and access some other locations for pictures in the mountains. We would end the evening with a with a nice dinner with just the two of us”

Jake described his perfect day as:

“Literally no agenda, just make sure I eat!”

For the following days, they wanted to go on a badass adventure. They wanted to hike hard, to stunning locations. So that’s exactly what we did.

When asked why they chose to elope, Jake and Shayna said:

We decided to elope for a few reasons:

1) Time: we do not want a long engagement because we are eager to grow our family.

2) Stress: We both come from divorced families and the stress involved with planning and respecting four families is hard. We also know that we are people-pleasers and a wedding for us would be stressful because we would be concerned about everyone else’s well-being. There’s also a few things in the wedding industry that we’ve felt like are distractions from the authenticity of our relationship.

3) Us. We’re always happiest when it’s just the two of us with no agenda or distractions.

I connected Shayna & Jake with the wonderful Jlenia Costner, Dolomites wedding planner, who helped plan an entire itinerary for them for their stay in the Dolomites in the days leading up to the elopement, as well as coordinating the other awesome suppliers on the day of their elopement.

For the days following the elopement, I used my knowledge of the area and training as a mountain hiking guide to plan an awesome itinerary for our hikes.

Jake hiked up to a beautiful viewpoint just after sunrise as the mountains glowed in shades of morning alpenglow and waited for Shayna’s arrival.

After their emotional first look, we hiked across to a small, nearby lake for their early morning vows and an incredible breakfast picnic organised by Jlenia.

Not wanting to leave a perfectly good bottle of prosecco (but not wanting to drink it all at 7am in the morning), Shayna & Jake decided to shake up what was left in the bottle for a photo. However, what resulted was an “instagram vs reality” moment, when poor Shayna ended up with a face-full.

After drying off, we headed across to our next location. Although very close by, to save time on their elopement day, we decided to take the chair lift up to explore the area. At the mountain hut at the top, we picked up another bottle of prosecco, as they were determined to do another champagne shot without spraying each other in the face. Unfortunately even for take 2, Jake managed to completely soak Shayna whilst being completely oblivious until afterwards when he turned to find her wiping the prosecco from her face.

Our final stop of the afternoon was another mountain lift ride to an area on the other side of the valley. We took a short walk along the ridge and enjoyed the birds-eye views of the valley, including views back across to where they had said their vows that morning.

After a few hours relaxing back at their 5* hotel, Shayna & Jake ended their elopement day with an incredible dinner at Michelin star restaurant La Stüa de Michil in Corvara.

The morning after Shayna & Jake’s elopement, we woke up to clear skies and perfect fall hiking weather.

Since S & J wanted to include bodies of water, I planned our hikes to include mountain lakes in the Dolomites. Since these lakes were a little to far away to hike to on their elopement day, they were the perfect excursions for their second and third elopement days.

The hike I planned for day two was just under 8 miles with an elevation gain of 2370 feet, but with the sun feeling bright and strong, it actually ended up feeling harder then our day two hike that was a lot longer.

Shayna decided to bring her other white dress with her, as well as the letters that their friends and families had written to them for their elopement. When we reached the lake, she changed into the dress and the plan was to read the letters to one another. However, before they got started, they were interrupted by a flock of mountain sheep who passed through.

For the final day of their elopement, I’d planned the longest hike. We would be hiking 13.5 miles and covering 3870 feet of elevation gain. We would be passing a few mountain lakes and streams through varying terrain and passing by a couple of mountain huts which would give us a great place to stop for lunch.

For the most of the day, we were ascending. Our day started with a short and steep ascend before and long and gradual climb out across a plateau. After a lunch stop at a rifugio and Shayna & Jake’s first Kaiserschmarrn (a sweet shredded pancake dish that’s typical in Tyrol), we tackled out last climb up and over a stunning ridge before a steep and unforgiving descent back to the valley and back to their hotel.

Shayna decided to buy new hiking boots for the elopement, but not wanting to get them dirty, hadn’t broken them in before their trip to Italy. By the end of day 3, she was suffering really badly from blisters and walking was painful. So if you do buy new boots for your hiking elopement, make sure you break them in, even if it’s only on dry trails or wearing them regularly around the house and doing daily chores. A bit of dirt and a few scuffs won’t impact your photos so much but blisters can massively impact your enjoyment of your elopement!

Loved Shayna & Jakes’s Story and want to learn more about eloping in the mountains? Check out these guides: 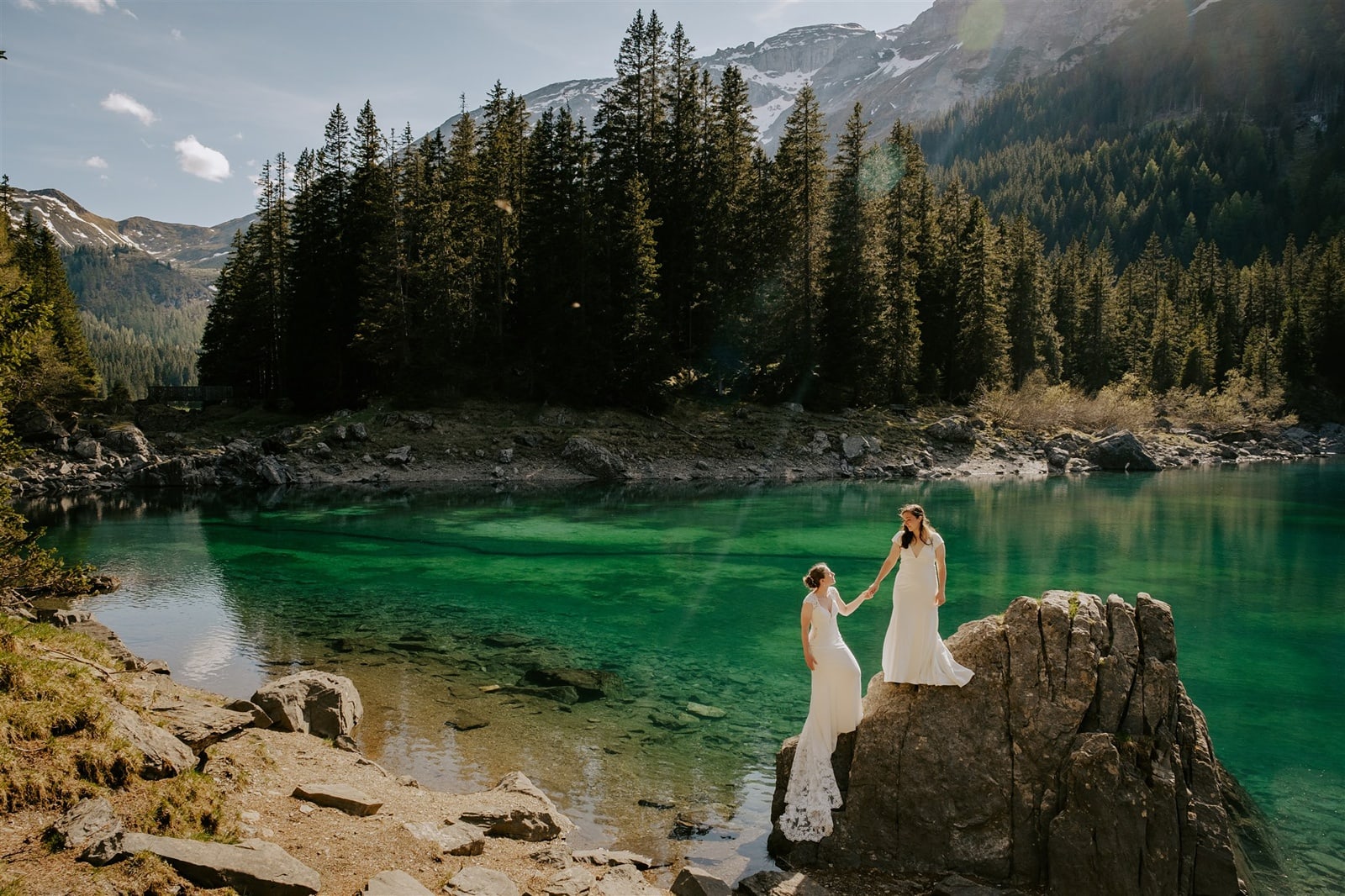 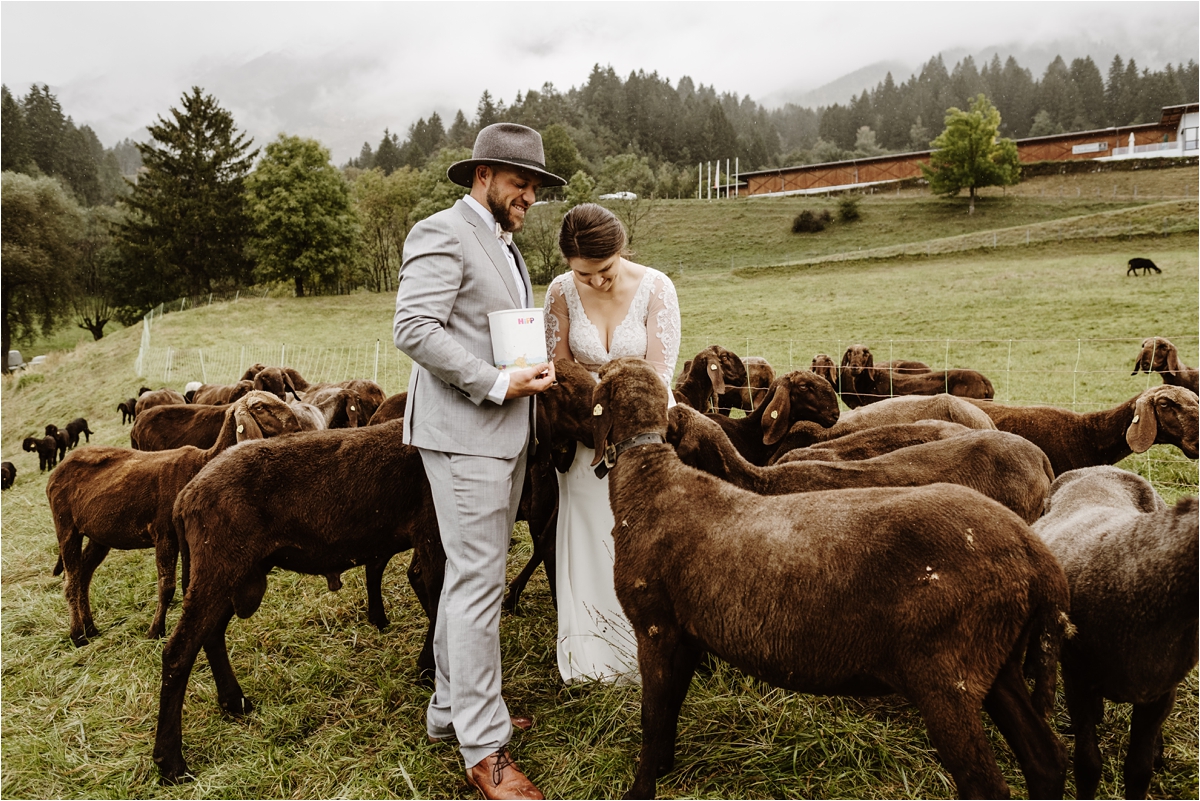 An Innsbruck Elopement With Sheep
Via Ferrata Adventure Session in Mayrhofen 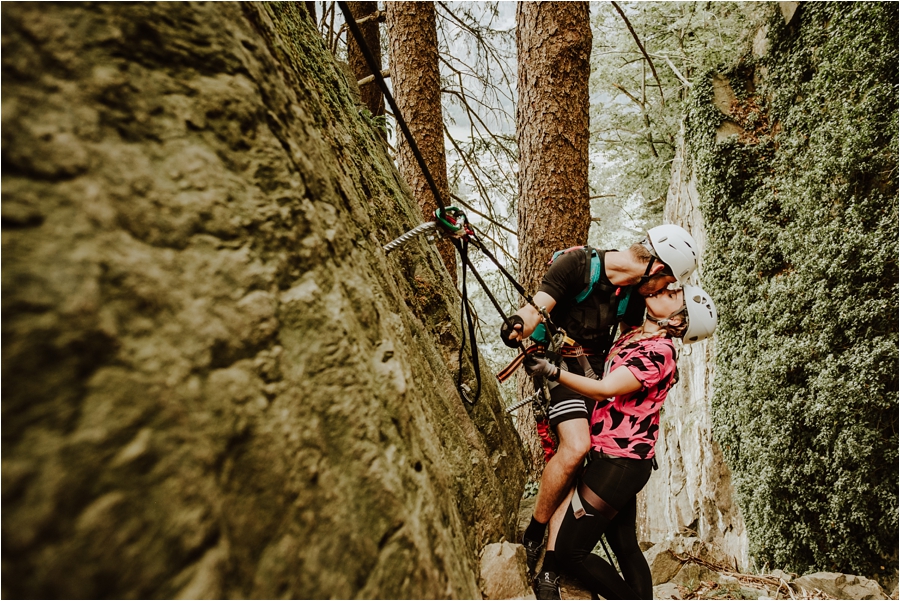