Jeremy emailed me a few months before a trip to Europe with his girlfriend Katrina. The main part of their trip was a rail trip through Switzerland. But since discovering Lago di Braies on Instagram, Katrina really wanted to make a detour at the start of their trip to visit this iconic lake in the Dolomites. They looked at their options and decided that they could make it happen. They would start their trip with 2 nights in the Dolomites, and then head to Switzerland for their main adventure. Or at least, that’s what Katrina thought was the plan. What she didn’t know is that Jeremy had something very special planned for their short trip to the Dolomites. He wanted to pull off the most romantic surprise marriage proposal at the lake.

A Hollywood-Worthy Surprise Marriage Proposal in the Dolomites

When Jeremy first contacted me about his idea, I suggested we jumped on a call to chat about what he had in mind and to hear all about their story.

Jeremy told me that he first asked Katrina to be his girlfriend by writing her a song and singing it to her during a very romantic lakeside picnic on their college campus. Since their love story started with a song by a lake, he knew Lago di Braies would be the most perfect place on their trip to tell Katrina how much she means to him, and to surprise her with a new song and this time a marriage proposal, and a ring!

Because of the increasing popularity of Lago di Braies, I knew that creating an intimate, private experience for the two of them could be a challenge. I recommended that Jeremy privately hire the boathouse at the lake, as not only does it offer some of the best views, but it’s your best chance for privacy. Next, we needed to work how I’d be there and go unnoticed. I came up with the cunning plan of pretending to be the person worked at the boathouse. I would arrive early and get the keys from the owners and pretend to be setting up for the day when they came knocking. The boathouse would be closed to the public, but when they came knocking, I would tell them that I could make an exception for the hotel guests and that they could come on to the boathouse for 5 minutes to take a photo on the deck.

Then there was the guitar. Jeremy couldn’t bring his guitar with him, as he’s never travelled with it before, and didn’t want to make Katrina suspicious. So I reached out to my friends to see if I could borrow one, and one person so generously said yes. Using my rusty knowledge of guitars, I tuned the guitar and hit it inside the boathouse out of sight. Our plan A would be that Jeremy would ask Katrina to stand on the dock while he set up his camera on a tripod for a selfie. As he came up to “set up the camera” he would get the guitar and walk back down to Katrina, sing her the song and ask her the big question.

In the weeks running up to the proposal, a lack of rainfall meant that the water level in the lake was very low, and members of the public could walk right underneath the boathouse and be standing really close to the dock. Jeremy was worried about how many people would be there at this time, and how private it would feel if there were people standing so close. We came up with a plan B, and waited for the day to arrive.

On the morning of the big surprise proposal, I arrived at the boathouse, got the keys and waited in wait for Jeremy & Katrina. Lots of people asked me if they could come on the boathouse and I told them it would be opening to the public at 9:30. But of course, when Jeremy & Katrina came along, I told them I would make an exception for them as hotel guests and I let them in, much to the annoyance of all the other people who wanted to get photos on the dock.

Jeremy and Katrina came in and went right down to the dock. They took a couple of pictures on their phones and then Jeremy walked back up the steps to “set up his camera for a shot of both of them”. Unfortunately, the group of photographers standing under the boathouse got annoyed that someone was standing on the dock and kept asking Katrina to move. I almost blew my cover by shouting back at them to tell them that Katrina had every right to be there, but Jeremy sensed her unease at being watched by so many people that he told her to come back up on the deck. Improvising, I told him to explain to me how to use his camera and that I would take a picture of them at the top of the stairs. He asked Katrina to stand in place, went and got the guitar and IT WAS ON!

Tears streamed down Katrina’s face as Jeremy sang her the most beautiful song that he had written, and at the end pulled out the most incredible, custom-made engagement ring that he’d had made for her. It was so incredibly romantic, and I felt like I was shooting pictures from a Hollywood movie. By now, Katrina realised that I wasn’t really someone who worked at the boathouse, but that I was there just to capture this moment for them.

After the shock and excitement calmed down, we took a quick break to grab some breakfast at the hotel, then went exploring the lake together to capture some pictures in the incredibly special place. 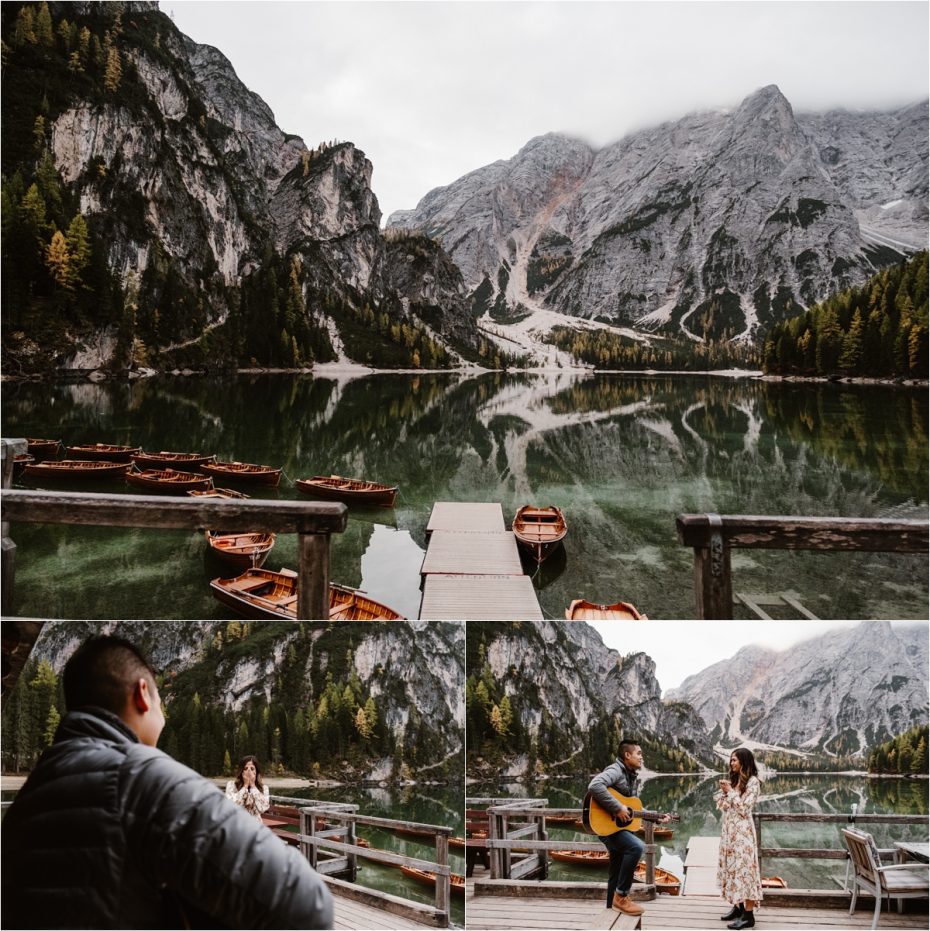 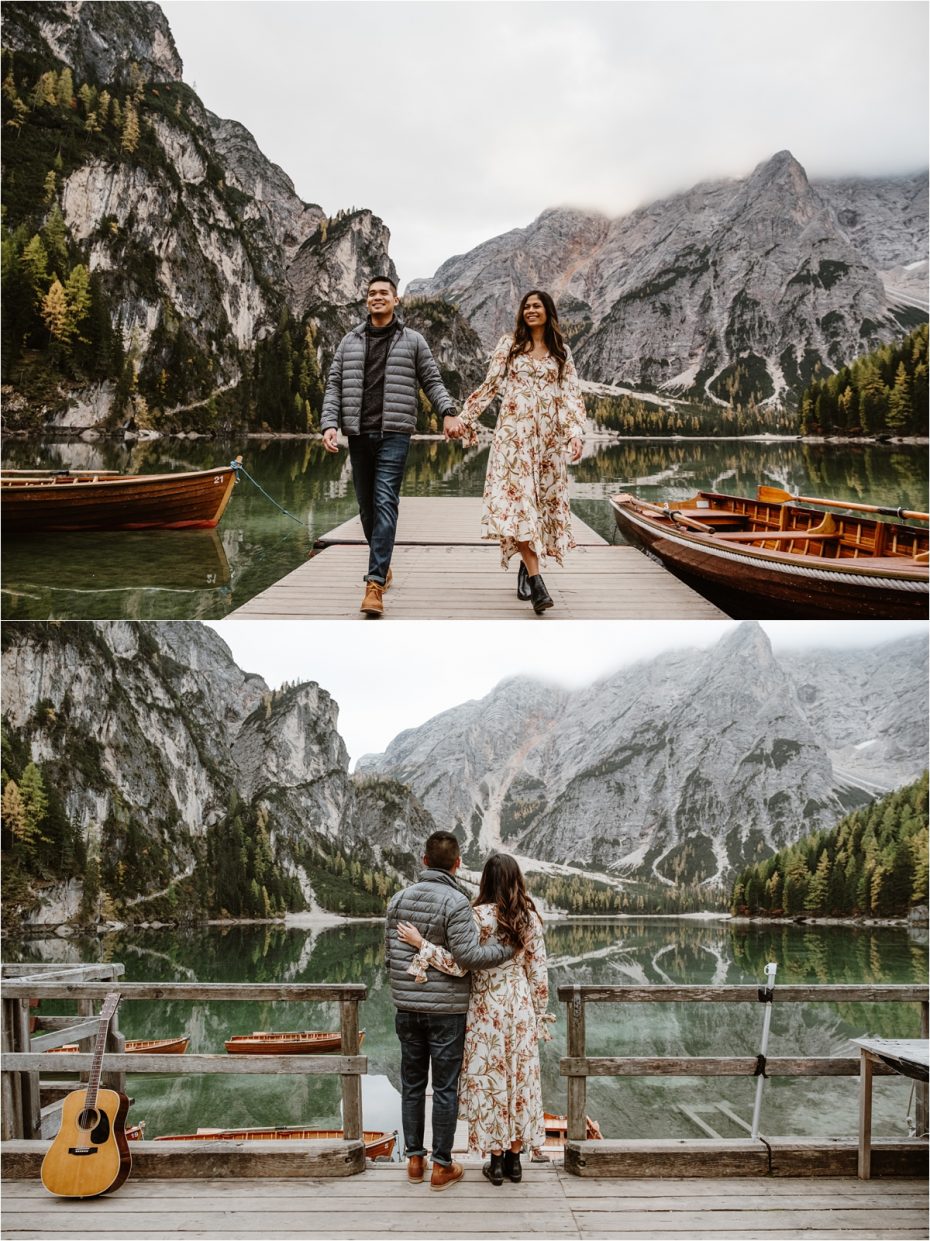 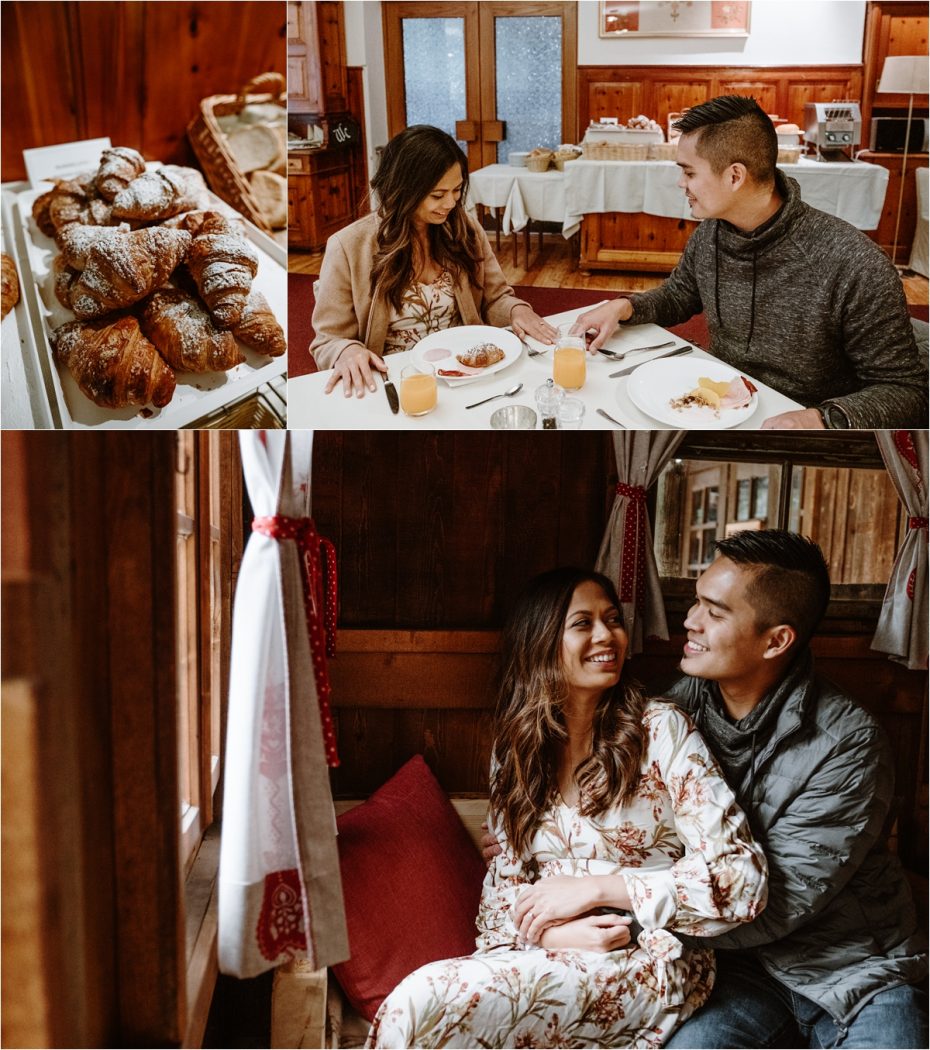 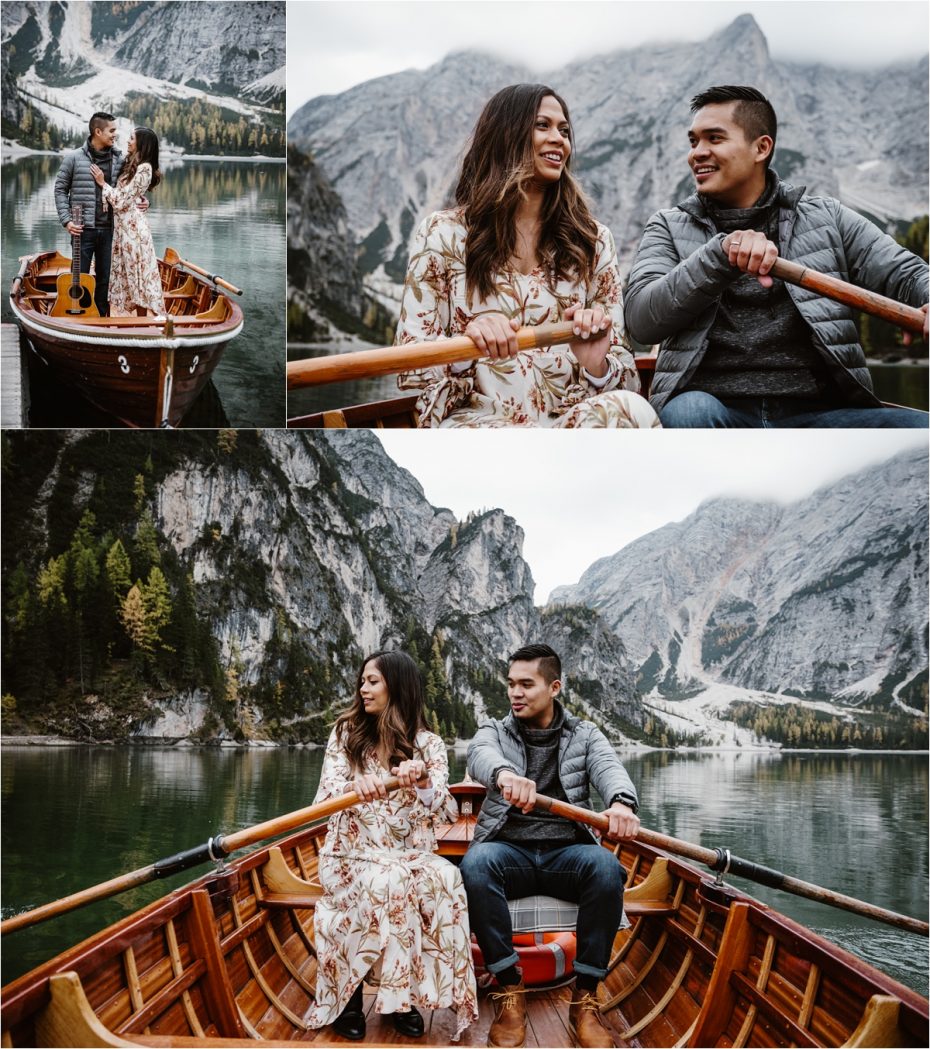 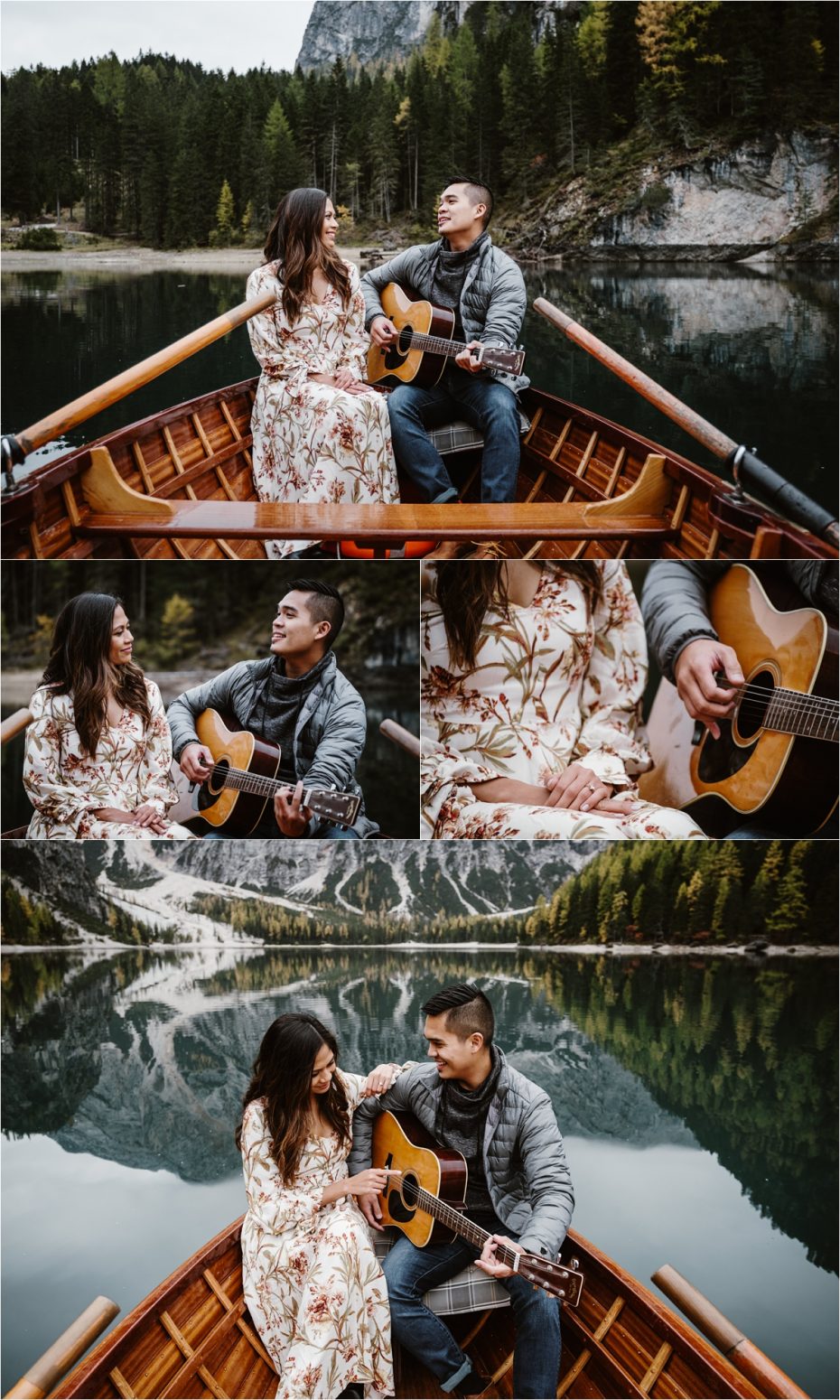 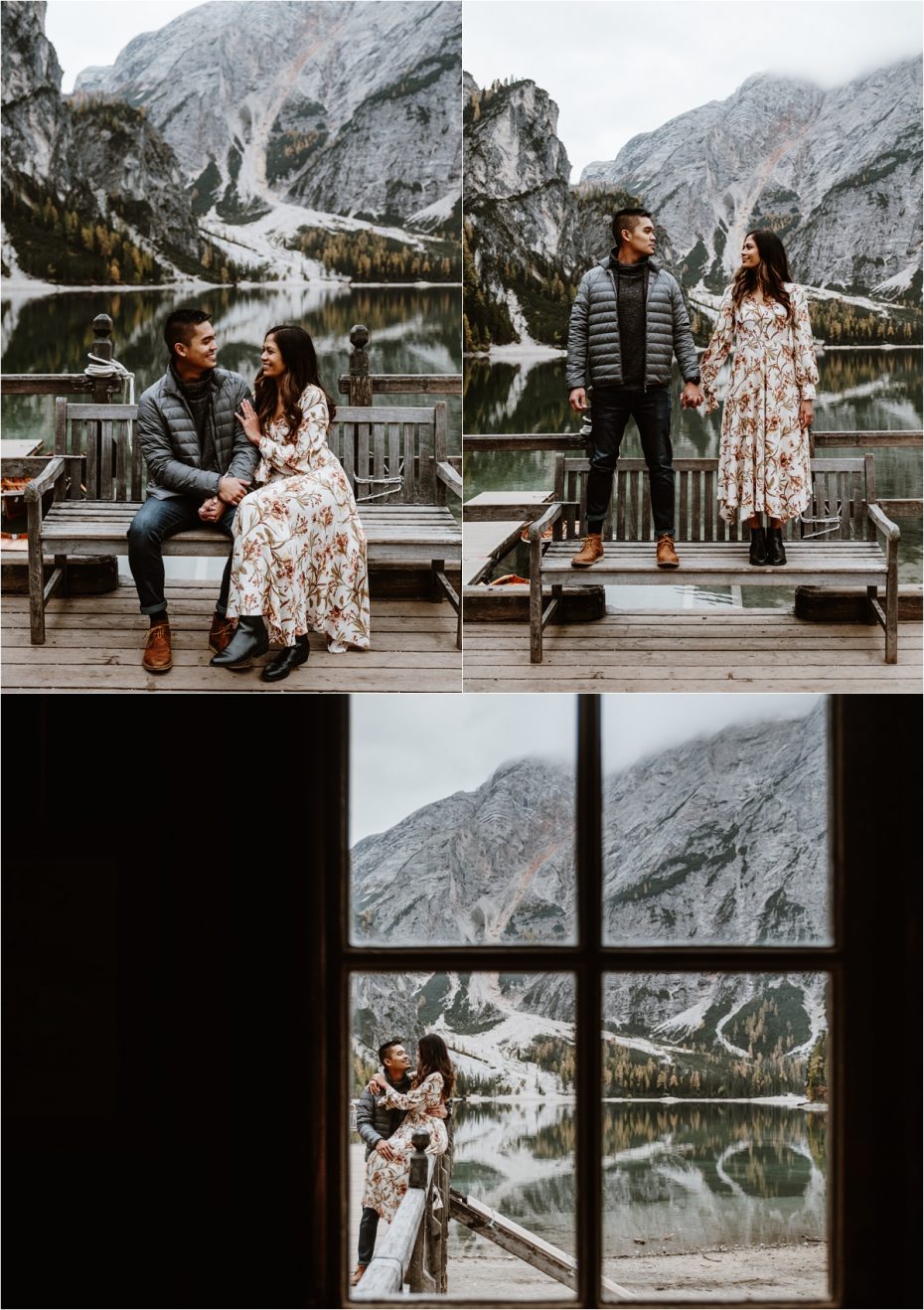 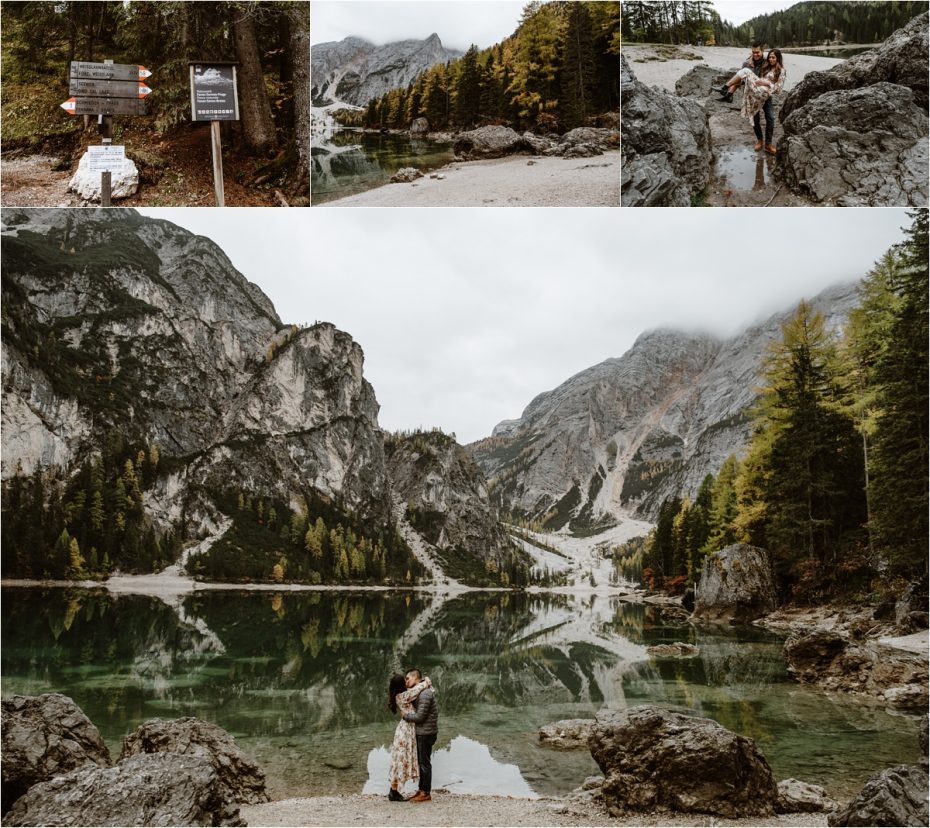 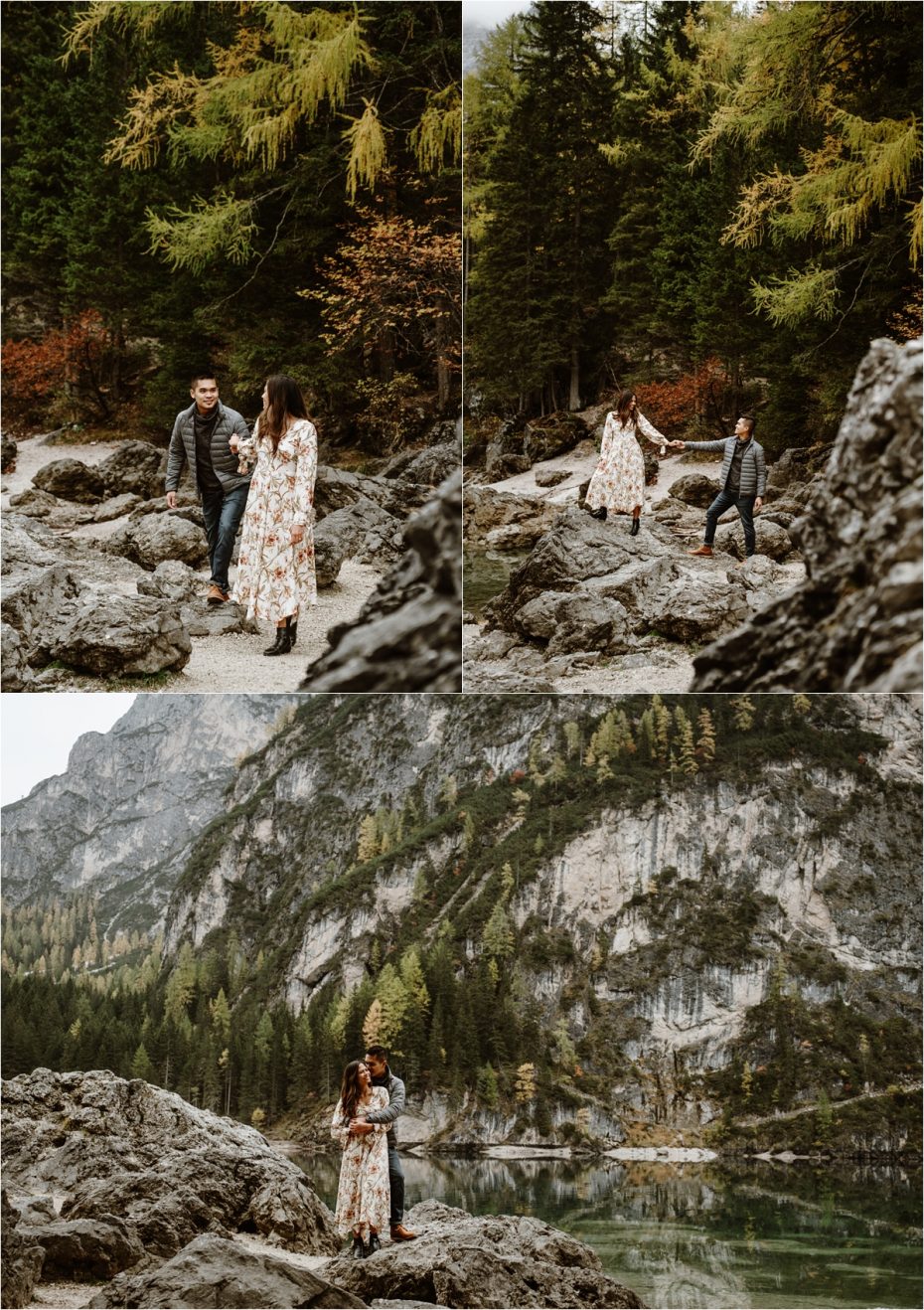 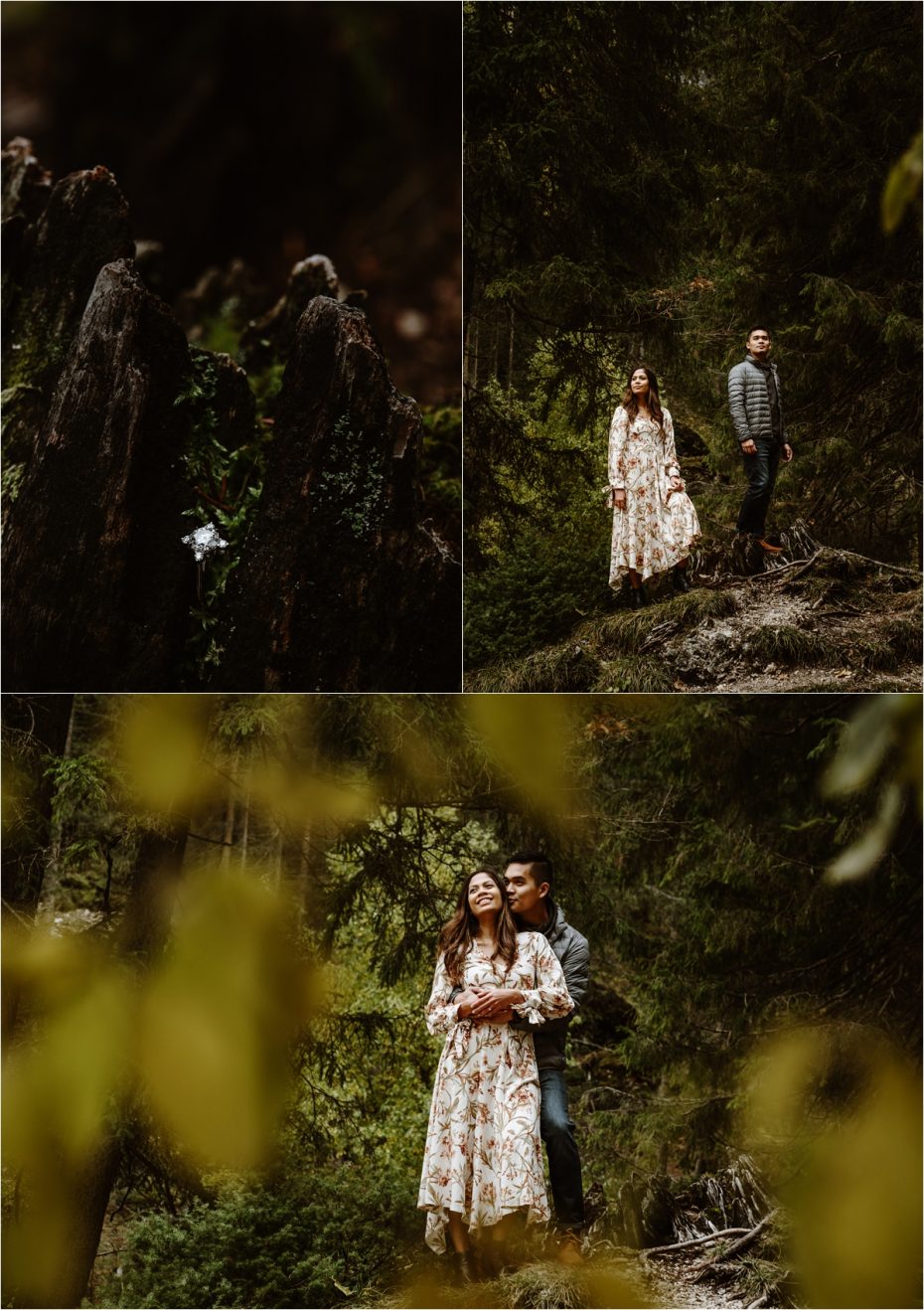 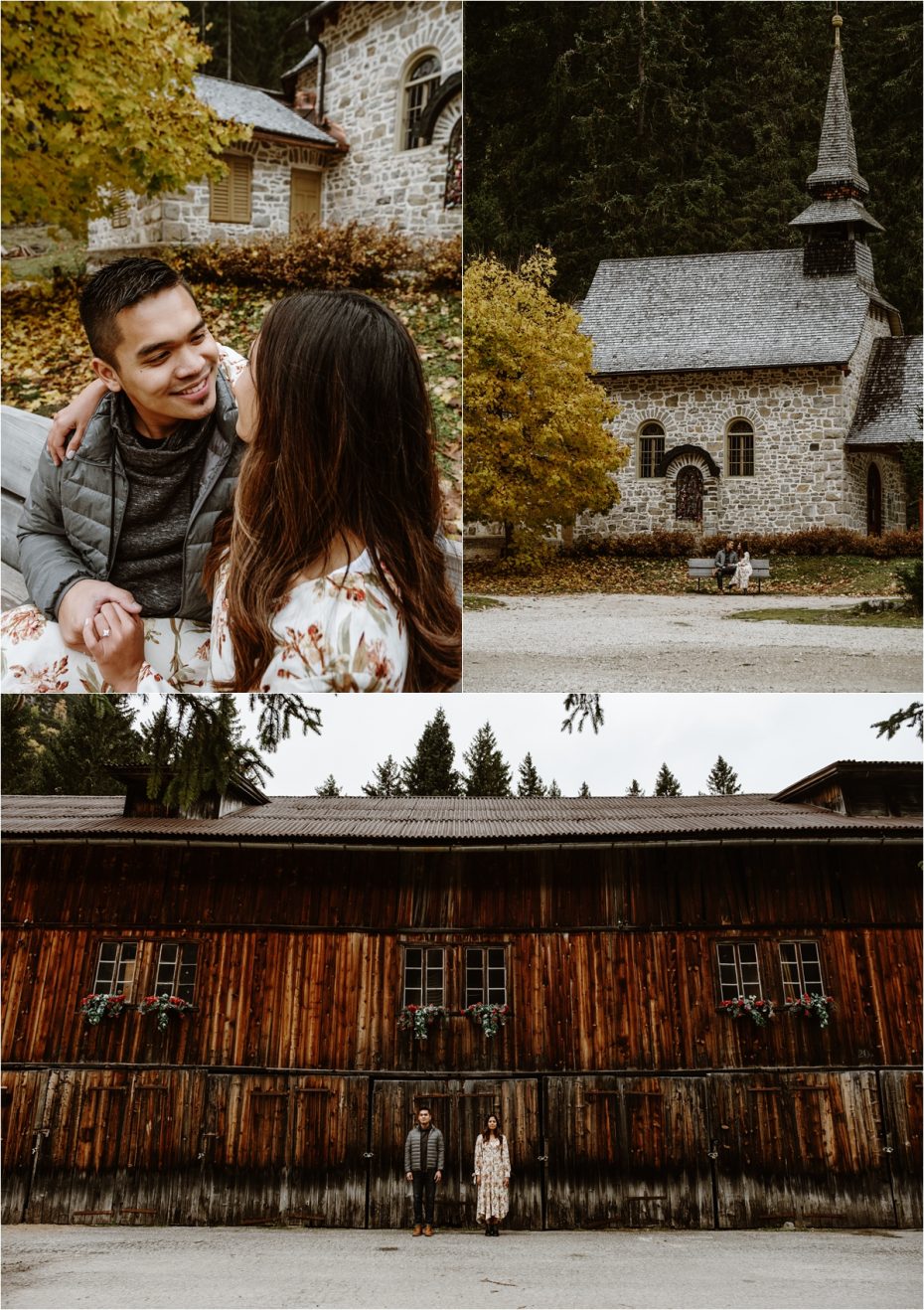 Want to see more inspiration from the Dolomites?

An Intimate Wedding In The Dolomites

An Intimate Wedding In The Dolomites
Seceda Elopement in the Dolomites 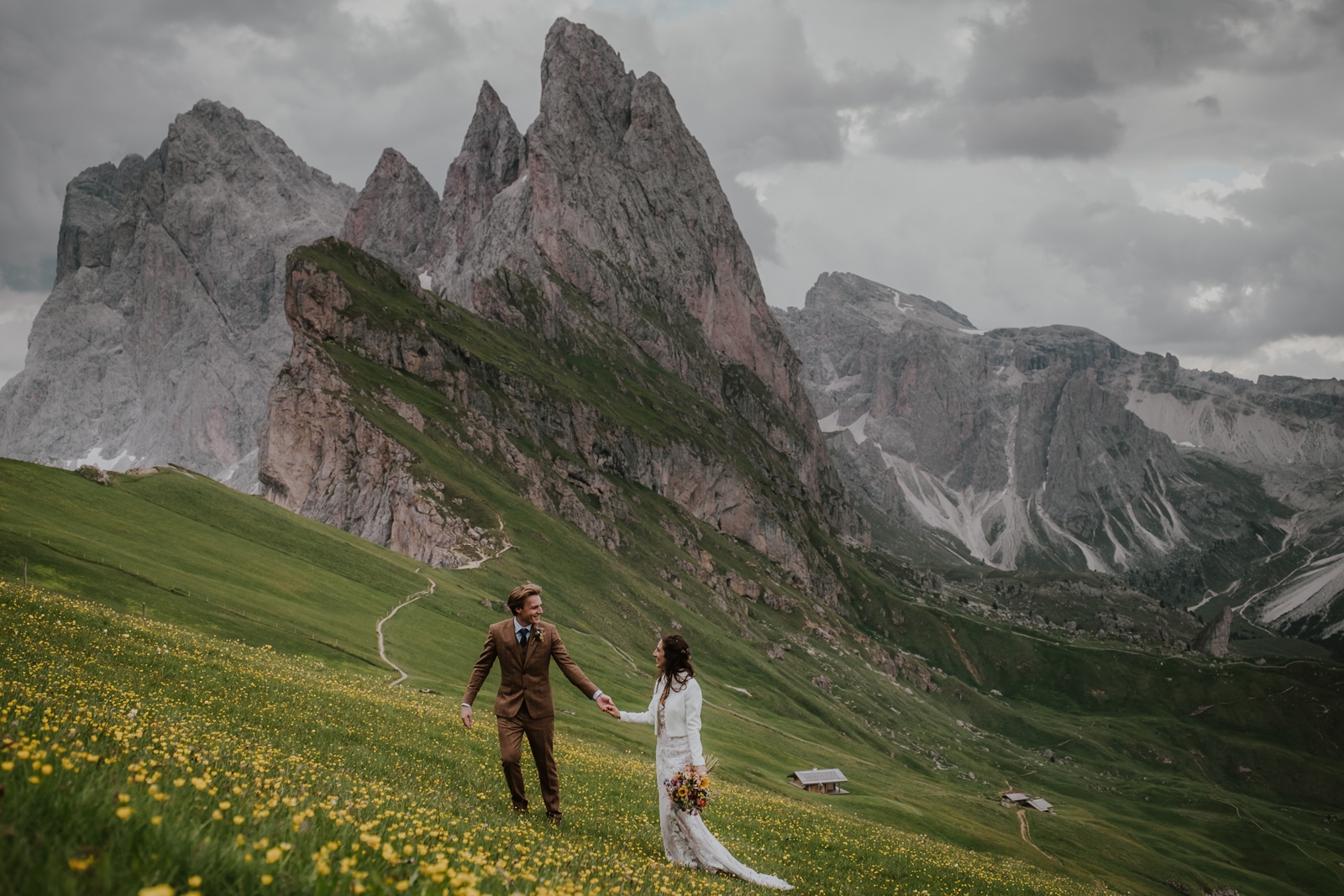 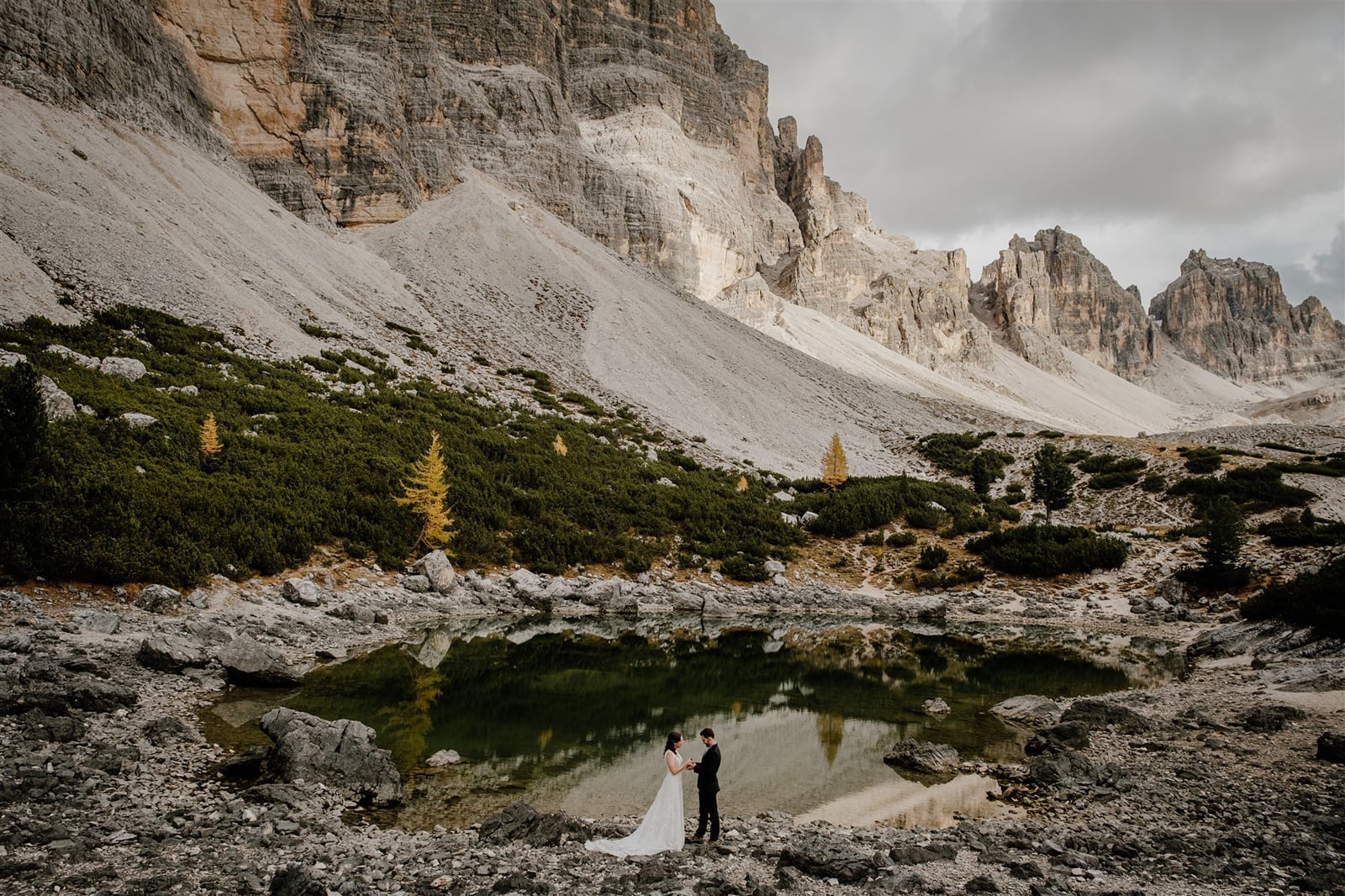 Hi, wondering if you do proposal shoots and how Do you charge. Thanks

Hi Ken, I have sent you an email 🙂